Hells Are Our Creations

I could hardly breathe. Sweat poured off my face as I bent and clutched a handkerchief to my mouth, attempting to suck some oxygen through the fabric. Only sometimes did I dare lift the cloth away from my mouth, desperate for a fuller breath; I was reluctant for the air was poisonously dusty. I gasped and gasped, unable to tell whether the primary reason for my struggle was a true lack of oxygen or panic.

Cerro de Potosí, commonly known as Cerro Rico (“rich mountain”), and also, dreadfully and honestly, as the Mountain that Eats Men, looms over the city of Potosí. For centuries, the Spanish Empire was bankrolled by silver from this mountain. In the seventeenth century, Potosí was one of the largest and wealthiest cities in the entire world. Of course, this glory did not reach the estimated 30,000 African slaves who were brought to the mines to work, or the three million indigenous laborers who were forced in. Knowing that the mines were indeed hell, the miners began to worship El Tío, the god of the underworld, the devil, who watches over the miners underground so long as he is appeased with offerings of cigarettes, alcohol, coca leaves, and the like. El Tío sits in the mines today, surrounded by gifts from the workers. 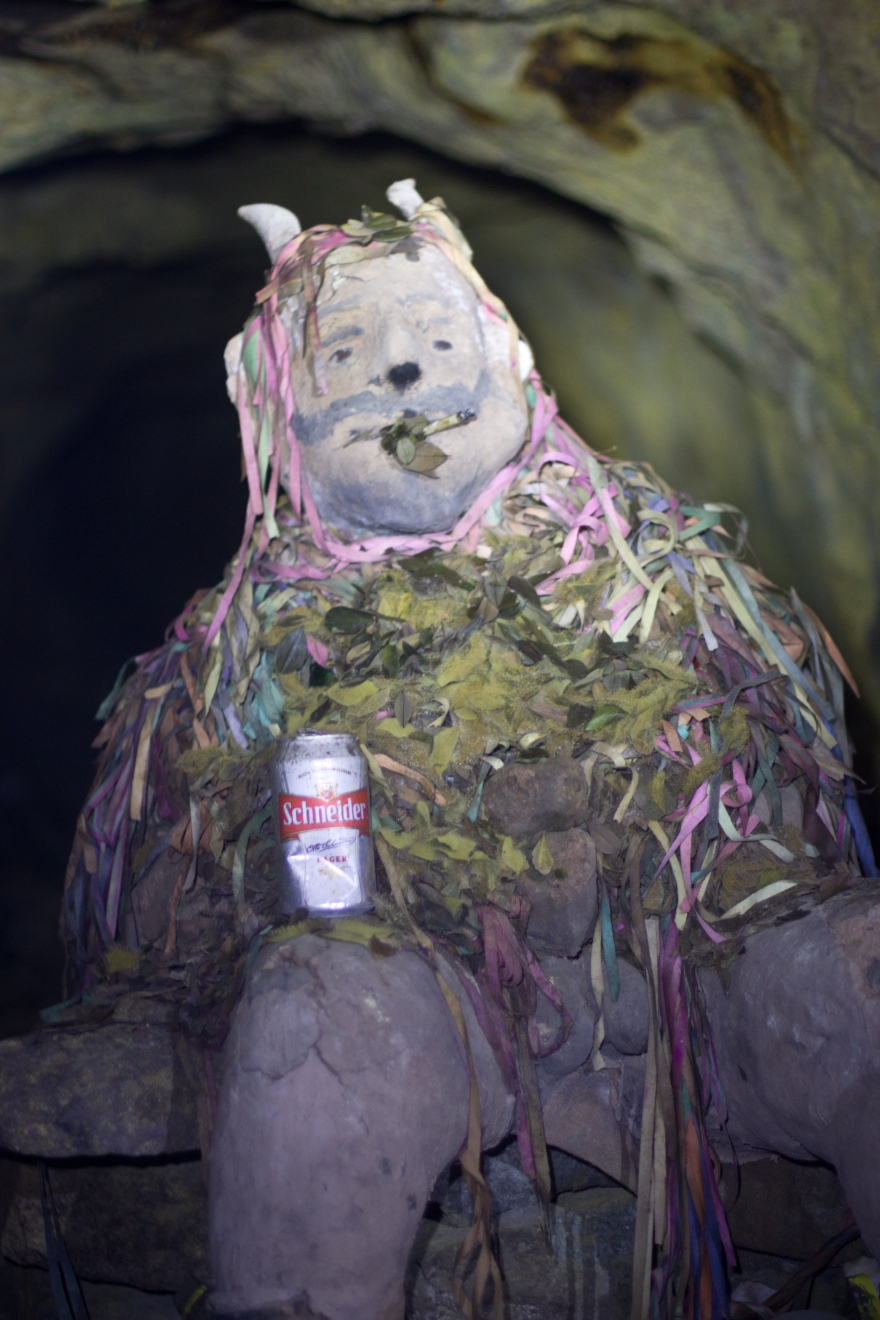 Crouched in front of El Tío, I tried to catch my breath. Our guide had taken his shirt off due to the infernal heat, but I refused to peel off the jacket I had been issued. I was too frightened of slipping and cutting myself on who knows what, of toxic mud—of everything in the mine, really. I tried to take a few photos, but my camera’s lens fogged up in the confined heat instantly.

Work in the mines is miserable. And, of course, it is dangerous. Equipment is basically the same as a hundred years ago. There are next to no safety regulations. The mountain itself is in danger of collapsing after being bored through for centuries—a sinkhole has already opened at the top and is growing. Cave-ins occur. People fall down shafts. Millions have died in this very mountain, and if they haven’t died inside, they’ll die soon enough out. Silicosis will devour their lungs in the end—an end which comes quickly. The life expectancy of a miner is about 40.

I stumbled through the passageways, chest heaving, repeatedly banging my helmet on the ceiling. Every now and then, we would hear a rumble over the hissing of the tubes piping in compressed air for the equipment. Our guide would shout to us to join him and take cover as a cart would go whizzing by on the tracks. I cowered in the small space between the wall of the passage and the heavy carts as they hurled by, pushed by miners up to the surface. Every time, I was genuinely frightened of not making it to a large enough gap and thus being hit.

When we encountered miners we gave them presents that we had picked up at the miner’s market in town—sticks of dynamite, water, juice, soda, coca leaves. Our guide would even toss drinks into miners’ carts as they ran past, unable to stop. It was a small gesture to counter the dark voyeurism aspect of these tours, and the miners were happy to take these goods. Potosí is the poorest district in the poorest country in South America. Miners now work in cooperatives and they have to buy their own equipment, so such gifts are at least welcome.

We descended four levels, ever further from the thin air outside the mountain. Funny, that breathing in one of the world’s highest cities would feel so relatively easy after this. Clambering down to the lower levels was harrowing as my short legs couldn’t quite reach the next outcropping and I had to simply slide down the chute on my ass and hope for the best as I reached out for handholds. I could feel the mud oozing through my pants. 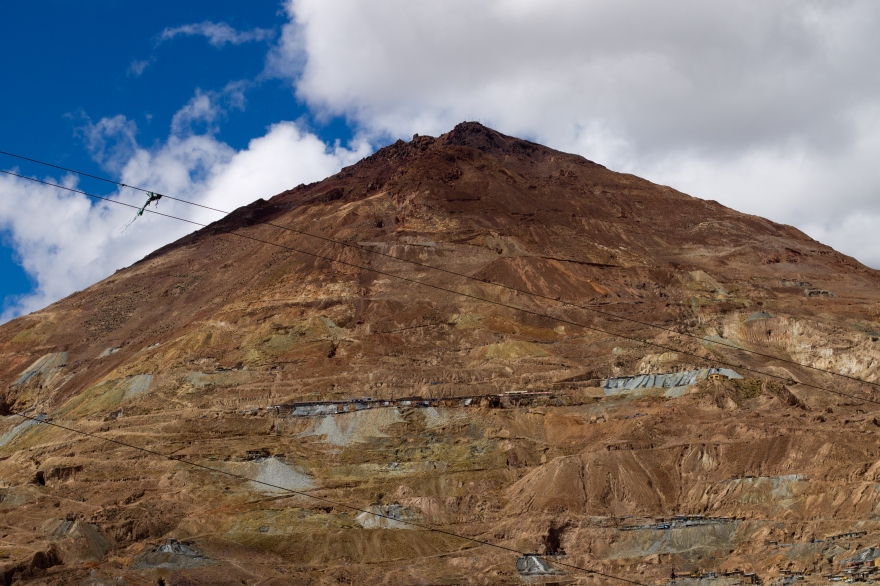 When we reached groups of miners working a seam together, we would often stop and sometimes they would let us try a bit of the work, chipping away at the walls, making a slot for a stick of dynamite. I could barely make my way through the mine with enough breath, let alone muster up the will to hammer. But the worst horror wasn’t physical. We asked some of the miners more about themselves. “How old are you?” “Fifteen.” “How long have you been working here?” “A year.” Child labor in the mines is not rare. Children can start working as young as 11 or 12. The Devil’s Miner, a documentary about two brothers working in the mines, was in fact playing right in front of me, no television necessary.

By now, a couple of hours had passed. Rachel, my friend, and I kept exchanging desperate looks. Rather than becoming gradually accustomed to the low oxygen levels, the dust ominously shining in the beam of my headlamp, the inescapable heat, I was becoming truly panicked. Every one of my instincts was rebelling against this hell. This is no place for a person. But I could not leave the tour early. After all, I was only going to be in the mine for a few hours. Men and children spend 16 or more hours a day, day after day, here. So I remained and pressed myself against the wall, hands over my ears, as the earth rattled with the shockwaves of dynamite explosions. Even more dust showered down around us.

In Potosí, men and children work the mines and accept their nearly inevitable early death sentence not out of choice, but out of necessity. They need to work to scrape together a living for themselves and their families. Potosí’s economy lies squarely on the mining of Cerro Rico. Yet, most of the miners will remain poor. It is others who reap the benefits of the mountain. The mines of Cerro Rico are some among many, and this is a fact: the people of the most minerally rich places rarely see much profit from the mines, and instead they are visited by pollution, sickness, death, and even war (see, for example, in the Democratic Republic of the Congo). All mines are hell, in some form or another.

The others who do reap the benefits are, in many ways, us. Those of us living developed country lifestyles with our iPhones, computers, and countless other goods utilize these minerals in a myriad of ways that we are largely unaware of. We compound our wealth while those who produce it see nothing of it.

The first natural light I saw glimmering at the end of the shaft exiting the mine was somewhat of a shock. Hell isn’t physically all-encompassing after all. In the mine, I struggled to focus on anything apart from my ragged breath and my fear. The dusty heat and dark were all that had existed in those moments. Now, I took a relieved breath of Potosí’s thin air. In the hostel bathroom, I splashed myself off as best I could and changed out of my now-muddy underwear. I couldn’t shake the mine though: an unease had set into me. I felt thoroughly disturbed. You see, hells might reside under mountains, but their tendrils reach out everywhere. 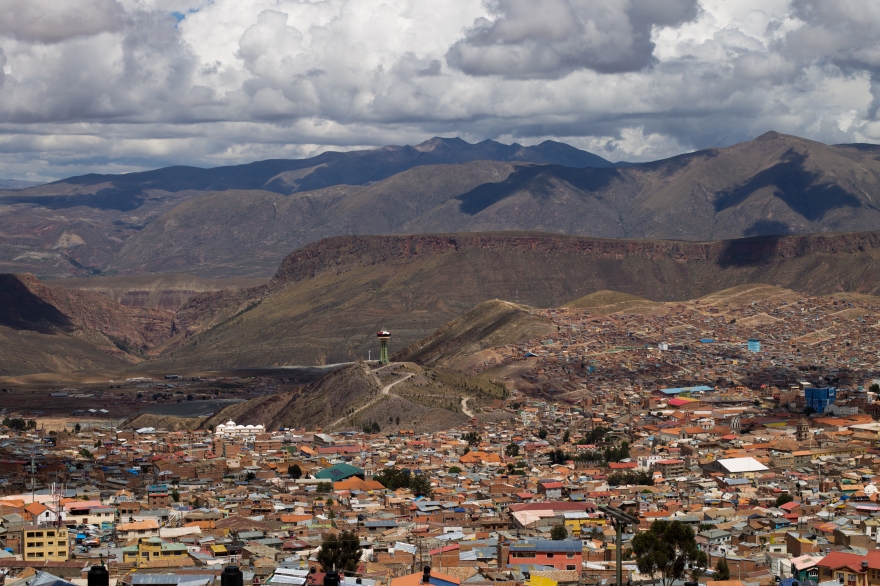