This project was done with the support of the Henry M. Jackson Foundation as a part of their Leadership Fellows program. This article also appears on the Foundation’s website.

Protest and activism have shifted in my esteem over the years I have been an environmentalist, that is, since I was quite young. They have both enraptured me and sparked disdain as I made my way through different environmental groups and movements, and as the topics and tactics of activists, and the activists themselves, changed. Over time I realized that different contexts demand different methods and that my perspective was really quite narrow, as it was shaped largely by the United States climate movement that grew out of the broader environmental movement—sadly, one that was not yet as diverse as it is now and one that, in my perspective, given climate inaction was the norm, was largely unsuccessful. At times, I have been tremendously frustrated. But, at other times, I have been inspired by the creativity, bravery, and passion that I saw, especially from those who have been long maligned. Attending protests led by Native Americans was overwhelming in the sense of how protracted their resistance has been and yet, here they were, still working to protect, well, everything alive.

Russia has also loomed large in my thoughts, though it isn’t easy to pinpoint why, just that it’s a knot I cannot untangle though I enjoy tugging at the threads. I majored in Russian for my undergraduate degree, and during that time, spent time learning about the Soviet and Russian environmental movements. I was also studying German, and for my thesis paper, compared environmental activism in the USSR and East Germany prior to and after the fall and dissolution of the Soviet bloc. I concluded that the German movement was stronger than that of Russia in the end—and at the time, it probably was. But, unbeknownst to me, as I sat in my dorm surrounded by stacks of library books, a future friend of mine was camping out in a forest outside of Moscow trying to protect it from destruction—and reinvigorating civil protest inside Russia in the process.

Me (right) with other trail building volunteers near Lake Baikal.

In 2014, I traveled to Lake Baikal with a friend who studies—you guessed it—environmental movements in Russia, where we spent two weeks volunteering with a local organization that builds and maintains ecotourism infrastructure, most notably trails. We spent these days laboring away in marshy land with Russians from across the country who had decided to use their time and money volunteering in this way.

Not long after, the same friend introduced me to Evgenia Chirikova, winner of the Goldman Prize, protector of Khimki Forest, my future friend. She wanted to practice her English and I certainly needed to refresh my Russian, and so we began speaking weekly. Through this relationship, I learned about her activism, and that of many others in Russia. It was occurring, of course, in an entirely different context than I was used to—one that was more dangerous, where civil protest had a very different history, where people who stood on the street by themselves with a sign could end up arrested and imprisoned. I started to learn about these people through Evgenia. Why did they do what they did? What sparked them to act? How did they decide on how to protest? How did they recruit others to join them? How did they cope with the fear? Evgenia personally knew people who had been attacked and even killed. She had been arrested. I’ve been to protests but never one where acute physical danger seemed likely. And yet, Russian activists keep at it, and I learned about new actions from Evgenia all the time. 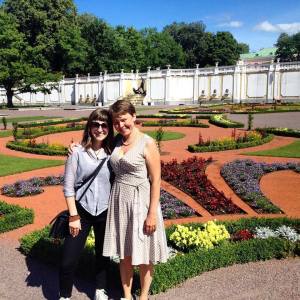 Me (left) with Evgenia Chirikova in Tallinn, Estonia.

So, I decided to take my questions to Russian activists themselves. I interviewed five people who have engaged on various environmental topics in different locations to see what I, and potentially other activists and environmentalists, could learn from them. I also want to inform a broader audience about their work, in order to support them.

Through the course of the interviews, I found myself frequently struck by how determined, persistent, and caring these people were. Even though the odds they face are long, and the dangers real, they are propelled by a sense of justice and care and the feeling they will have a positive impact in some regard, even if it isn’t immediately obvious, that keeps them working despite the real costs they have incurred. Some of them have had to leave their homes, some have been physically attacked, and some have spent time in prison. But they all kindly took the time to speak with me. In the following five articles, I do my best to summarize our conversations and convey what I have learned, in the hope that it inspires others. The willingness to learn and adapt, the strong sense of justice, the commitment, and the kindness all of these activists share is something I hope to emulate. I would strongly urge you to share the stories of these people, and others around the world who are trying to protect our shared earth despite dangers, and lend support where you can.