Just Another Existential Hazard of Being a Woman

This was originally posted on 13 November 2012, when I was living and working in Cusco, Peru. Though this was five years ago, and I am now based in Seattle, things haven’t changed. I was last harassed just over a week ago, and then less than a week before that. It is endless. It is a bombardment. It makes me angry. It limits me. So, here goes again. I haven’t changed the wording of this post because, sadly, nothing has changed. Maybe there is a bit more awareness thanks to (mostly) womxn diligently speaking out, but we also have a harasser in chief here in the U.S. The #MeToo campaign has spurred conversation, so I am (re-)adding this story (one of many) and also demanding: men, we need you to step up if we’re going to truly tackle the scourge of sexual harassment and assault.

I was asked if I was actually going to publish this post because doing so might make people worry about me. But yes, I will publish this post because if people care about me and are concerned, they should be concerned for the welfare of women everywhere. Because what happens to me on almost a daily basis happens to millions of other women around the world; if you’re upset about it then do something. Harassment continues because consistently people–especially men–turn a blind eye, effectively rendering it socially acceptable.

So, last Thursday I was verbally threatened with rape. 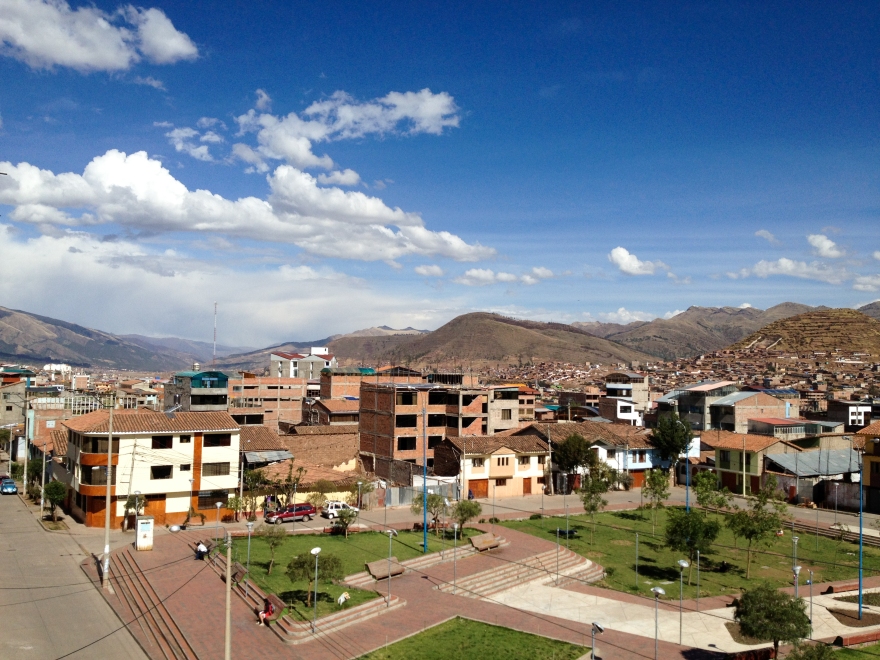 The view from my place in Cusco. I was threatened just around the block from my home.

But let’s take a step backward: almost every single day, almost every time I leave the house, men harass me. Today walking to work I got the obnoxious “hello, hello, I love you!” On the way home I got whistling. This weekend I had two men and a moto taxi closely following me and my (female, which really goes without saying) friends. Almost every single day men bother me. To them I’m a blonde, sexual piece of meat walking down the street.

Step back again: I’m not only harassed in foreign countries. I’m harassed at home, where I don’t stand out. I dread running alongside the road to the park because about half the time I get men calling at me from their trucks. I always power walked home from class (inevitably after dark) so as to give men as short of a glimpse of me as possible. I don’t look men in the eye when I walk around. Even at home. Because I get whistles, I get obscene comments, and who knows if someone is lurking in the dark, hence my pepper spray.

How dare we have the audacity to walk while female from a café about five minutes away from my house and the office at the terribly late hour of 8:30pm? How dare we, especially when it wouldn’t be possible (or economical) to catch a cab for five blocks? We were walking to my homestay when across the street from us two men, sitting comfortably in their front lawn, apparently making a sport out of threatening female passersby, began yelling in heavily accented English, “fucking bitches! Fucking cunts! I’m going to rape you!”

And what do you do when this happens? Freeze a little inside, walk faster, and once I was slightly more safely some houses away I thrust my fist in the air, my keys laced between my fingers as threats, as they always are after dark. And then the disbelieving questions to each other: “did that actually just happen? were we actually just threatened with rape?” And then the anger which is, for me, quite omnipresent: I can’t go anywhere without being a target! It almost always happens! And why? Because men have the power? Because they think women are objects? Because they simply can? Because when they do it, no one ever tells them to stop being pitiful scum and just lay off?

I’ve been harassed countless times; and I’m sure my friends and plenty other females could tell you similar stories. And not once–not once!–out of the hundreds of times I’ve been harassed, has anyone, has any man, told the perpetrator to knock it off. Never.

And it’s not like I’m always in an empty street, just me and the scumbag. And it’s not like I don’t draw attention to it either. I used to try to ignore it and walk quickly past. But ignoring doesn’t make people go away and besides, I’m done being a passive woman. I’m not going to shut my mouth and let people bother me. It has worked when I’ve yelled back: this weekend when the two men and a moto taxi were following my friends despite the fact we clearly weren’t going to talk with them, I turned and shouted (in Spanish), “go away!” They stepped back a bit but when they continued to keep pace with us, stare at us, I yelled “pitiful!” And lo, they backed off and let us be, even saying “sorry, sorry.” This incident was in fact on a deserted street, apart from us. But a few days before, in the Plaza de Armas, people abound, a disgusting male hollered at me the old “hello, hello, I love you!” I turned, cursed at him, and continued on my way but from the multitudes of people around, right there: silence. 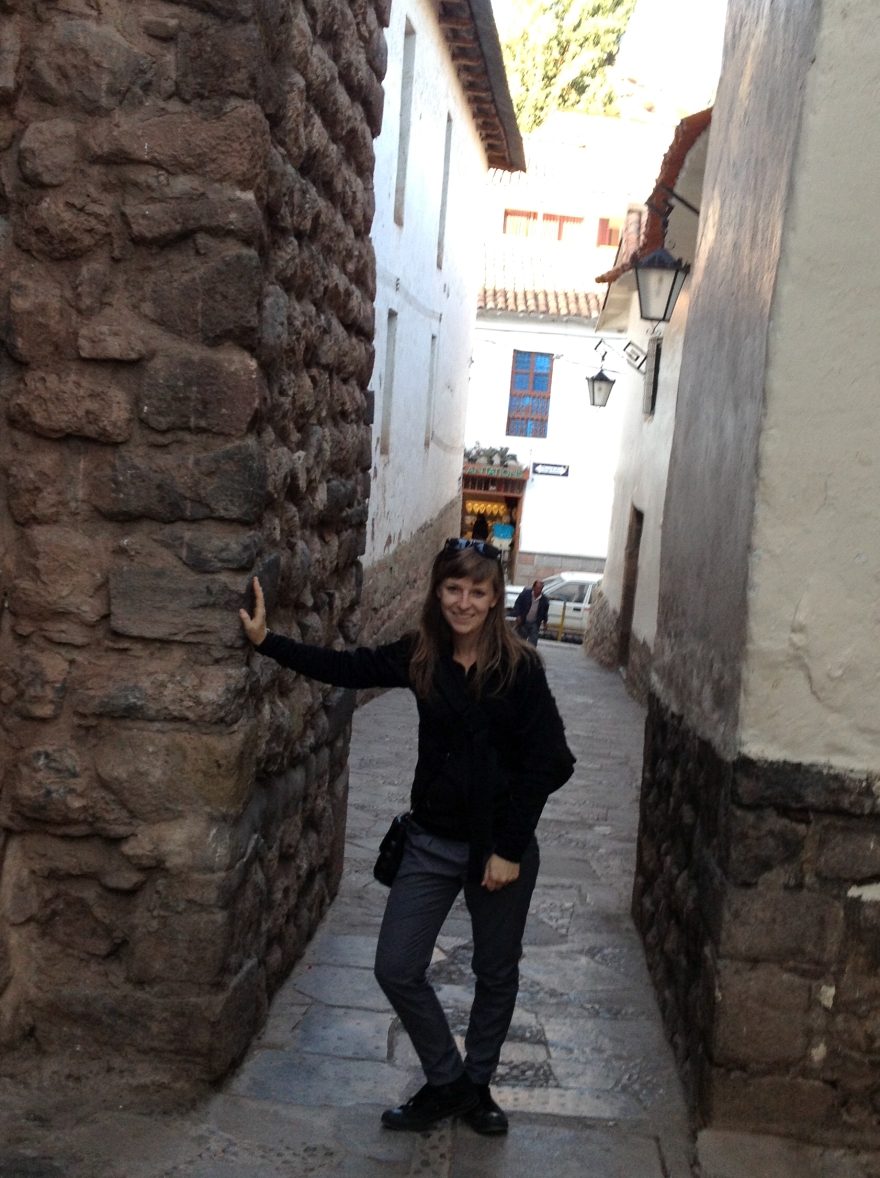 For me, these streets are dangerous. Me in Cusco, in my typical attire – not that it should fucking matter, and it didn’t, because I was harassed all the same.

I believe that this a significant reason why street harassment, which leads to even worse, continues and is so prevalent. Here, or in the United States, people, especially other men, never stand up to the scumbags and tell them: “stop it! That’s not ok! In fact, what you’re doing is pitiful and disgusting!” And especially men I say, because men shaming other men would have more of an effect (males want to be accepted by their peers after all), but also because many men seem to care very little about the problem.

An illustration, which fit my point so perfectly I was seething afterward. Friday morning I go to the office to go to our project. I tell everyone in the office what had happened the night before; I wanted to warn the ladies especially, since I knew a couple who don’t live far. There were three men (or boys) in the room and about five women. The women, and one of the men (Peruvian) responded appropriately: “where exactly? When? Oh gosh, that’s horrible! Are you okay?” Here is how the other two men responded:

First man: oh, they were just practicing their English!
A joke! A joke about a situation in which I was threatened with rape. To which I responded (or snapped), “no, they were making a sport out of threatening women!”

Second man: oh, maybe they were drunk!
To which I responded (or at this point, rather snarled), “oh yeah, because drunk men don’t rape! I don’t care, if you have any inkling within yourself of saying things like that ever, then you’re dirt.”

So you see, the responses of women and many (in this case the majority) of men are quite different. One group expresses concern, and then anger, and then (as my Spanish professor and I do) begins brainstorming various reactions. The other group blows it off, excuses it, makes a joke of it. And this street harassment and everyone should know what else continues.

So, family, friends, anonymous readers: are you concerned about me? Are you concerned about your sisters, mothers, daughters, girlfriends, female friends? Because you should be. It happens to us all. And once is too often; this happens far too often. If you’re concerned, then, confront those jackasses whistling at anonymous women. Those women are us. Tell them it’s not okay or ever okay. Shame them. We have been taught all too well by history that atrocities happen when entire populations turn a blind eye. And this is a daily atrocity, the degradation of women who dare simply to walk around.

On a closing note, wisdom from the Manic Street Preachers: “who’s responsible? You fucking are!” (from “Of Walking Abortion”).