A Place Is What It Is

Alaska in winter. Skeptical and bemused expressions acknowledged my plans. “What will the temperature be? Will there be any daylight?” Interesting questions and yet, the answers don’t matter.

My friend alerted me to an airline ticket sale to Fairbanks, where she lives. I could get cheap tickets through February. So, I went when I could go and I was glad. February is a reality. Winter in Alaska is a longer reality.

The point is: I’ll go at any accessible time.

The corollary is: I want to see a place for what it is, not what I want it to be.

Of course, everyone has a mental filter through which their impressions fall. What is called reality is only a part-truth, for no one can encompass a whole place, and its everything. But still, I’m not waiting for a place to suit me. I will suit myself to the place. And in this case, borrowed jackets upon jackets and a wonderful host simplified this process. I was shown Alaska in February. When the timing is right, absolutely, I’ll see it in summer too. It’s just that anytime can be fun and interesting, if you let it be so. What I’m saying is: Abolish constraints.

Snow shapes glided beneath the wing of the plane as we descended. I followed an Alaskan Senator off the plane. My friend greeted me and showed me the bears (taxidermied) in the airport lobby. We crunched over the packed snow parking lot to her car. And then we went to a First Friday art show on microbes.

Awareness of microbes is important, and the cold is too. Quite a lot lies under our feet in broad swathes of the earth, trapped in permafrost. Which is melting. Representations of some of these no-longer-captives hung on the walls. There was also a partially decomposed shirt enshrouded in glass. And stuff to do with mushrooms. Despite having to weave my way through the crowded rooms, consider me fairly impressed. 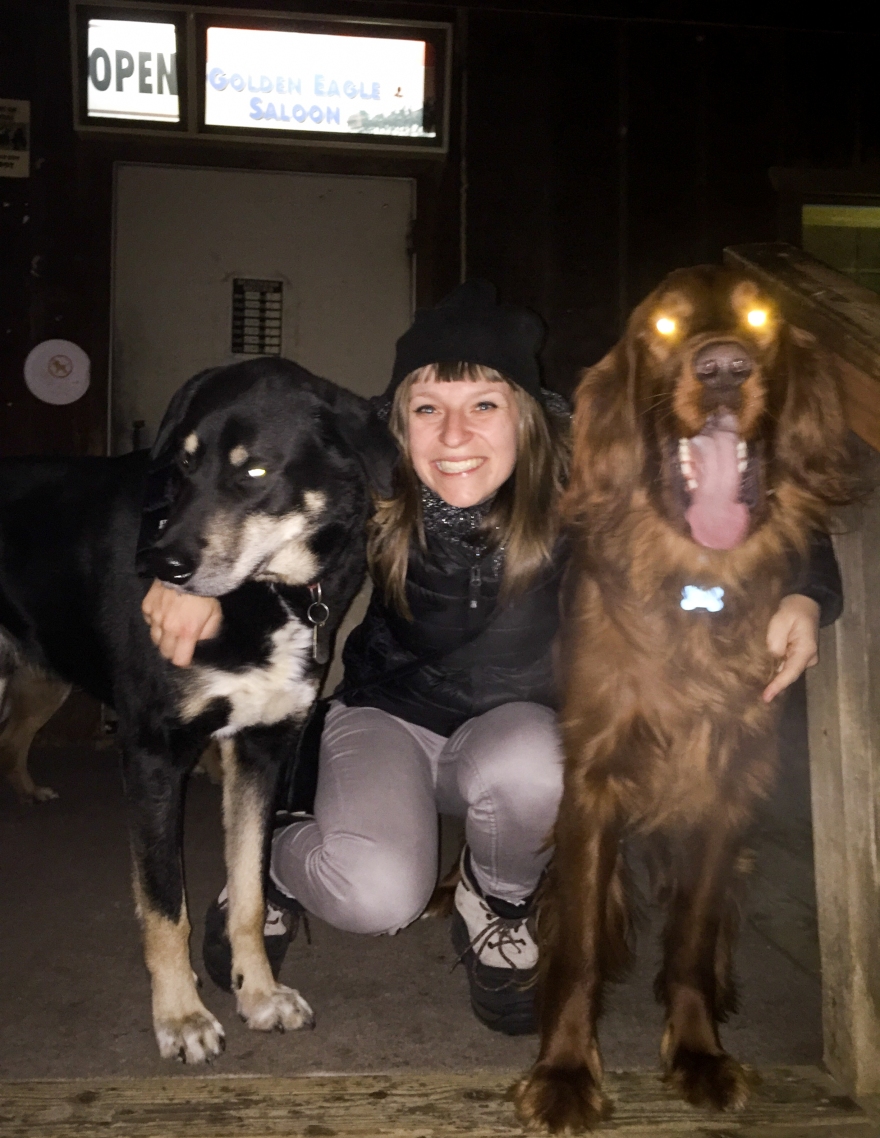 The adventure switched gears. First, a visit to a local distillery, which was hosting a firefighters’ auction-art show (where we laughed at my friend’s art). Second, to a dive bar, complete with bar dogs who hung out on the porch. One in particular especially wanted in, just to socialize. Third, to a drag show. It was packed and I observed the observers (and who could help but notice the great queens?). A woman in a gun rights shirt enjoyed the show a row in front of me.

The night ended with a drive up a dome (as in, a rather large hill). I stood on the edge of the road in the snow, half sunk in, squealing about the aurora overhead. 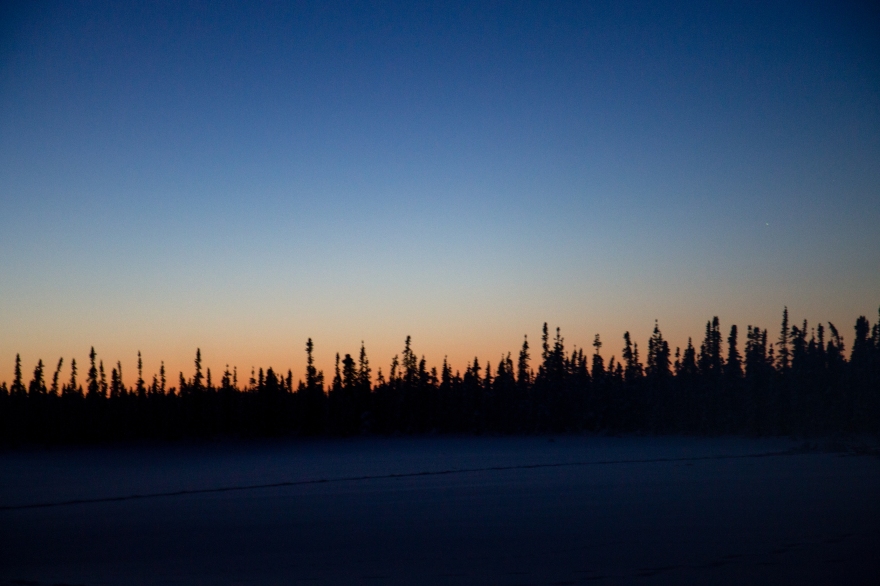 The next day, I clumsily stepped into skis for the second time in my life and shuffled along with my friend, her brother, and her dog for about ten miles. The snow positively sparkled, refracting the low sun around us. Trees drooped heavy with snow. We skirted moose poop. The sun disappeared on our way back to the car but the moon was bright, and headlamps illuminated the tracks in front of us. I had stayed warm enough while skiing, but was eager to get into the Chena hot springs as our headlights cut a path through the darkness on the way there. My friend and I cautiously galloped through the frigid hall to the hot springs, and sat in the water as soon as we could. Steam rose around us, and my hair turned white once again. The trees lining the spring were entirely encapsulated with frost. Some lamps shone through the steam. We floated through the mist, dodging preemptive Valentine’s celebrations, doing a lap around the pool. And then I was too hungry and thirsty to endure the heat much longer, so we showered off and went to the resort restaurant where I easily ate all that I was served.

The following day was back in the city, visiting friends and cafes and downtown Fairbanks and an open-air museum and the Trans-Alaskan pipeline and an old gold dredger. Lest one think you must hide away the whole winter, let our putzing around show that’s not the case. We ended the day sitting in a hot tub waiting for the aurora. A faint green stripe was just visible across the sky. I jumped naked into the snow a couple of times, but that’s just me.

I couldn’t leave Fairbanks without having some Thai food (it’s legitimately a thing: Fairbanks has a relatively sizable Thai population and a cluster of restaurants to follow), so we had that for lunch, before I passed my final few hours at the Museum of the North, waiting for my flight, and watched a short film on the aurora. Ready to go, I find out that snow in, yes, Seattle had delayed my flight by many hours. 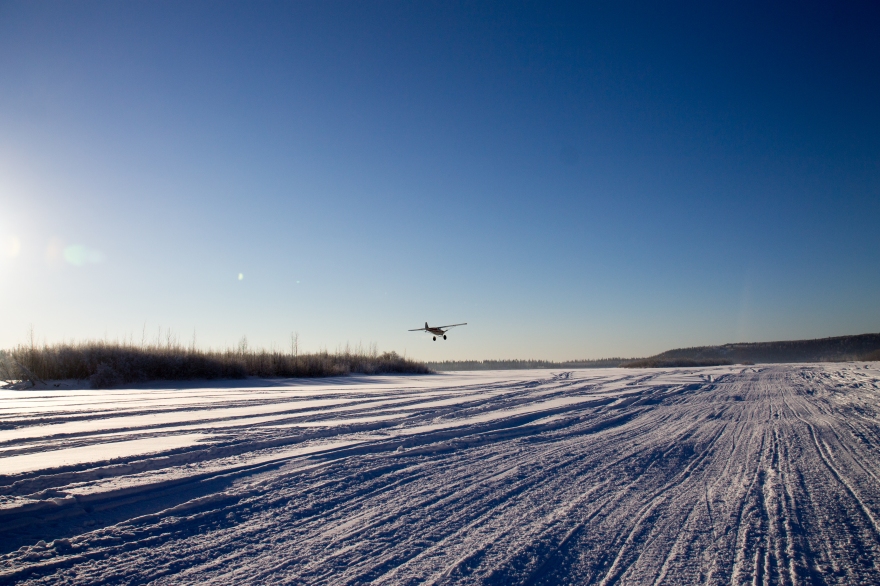 I would fly out the next day instead, after getting in a morning ski over the frozen Chena River. A small plane kept flying overhead, waving at us in a plane way, dipping its wings. The sharply angled sun hit the snow and ice. Right before going to the airport, we drove up a dome and looked out over the land. Snow and trees and mountains. My snot froze and I trudged through the snow and beheld the land as it held me. This is real, and I am seeing it. 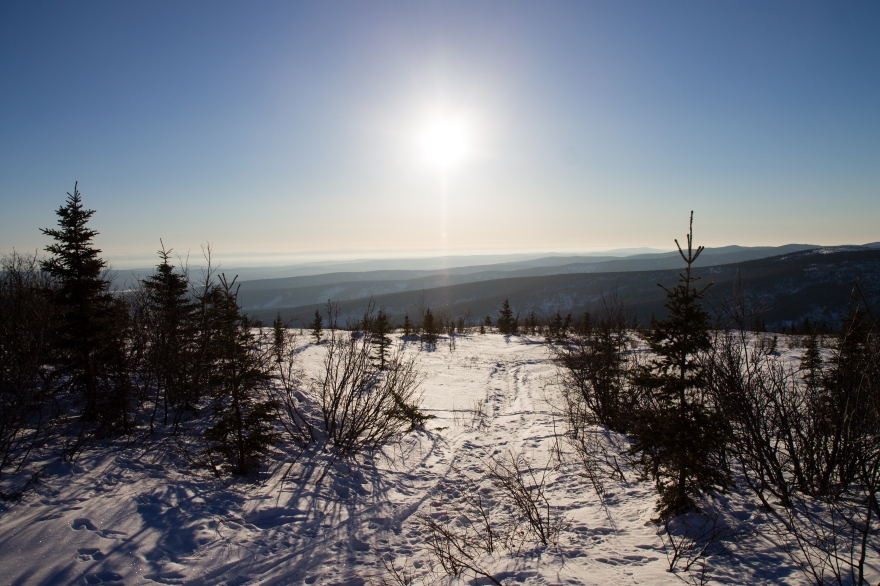