I tried to focus on Mandalay Fort, across the moat by which I stood. I couldn’t. I pulled the camera strap off from around my neck and switched to manual focus. Back on. I still couldn’t focus. The lens made uncomfortable clicks and skipped, the image relayed to my eye by little mirrors jumped from one kind of blurry to another. And thus I learned my go-to lens was broken. Luckily I had two others. Both are great in particular situations, but not quite as broadly versatile as my damaged lens. Disappointed, I buried the broken lens in my pack, swapping out its seat on the camera for the prime lens. Now I had one distance at which to gaze at the world through my camera; I had to look differently, physically moving myself to see more.

While in Nyuang U, we decided to visit Salay and Mount Popa. In the hotel’s common area, we befriended a funny Japanese guy who agreed to share a ride with us the next morning. So, we found ourselves bumping along in the morning chill, temples moving past our windows, as our driver carried us along the highway. The scenery shifted: it became hillier, greener, and oil wells began appearing, pumping in rhythm, their solid blackness and extending pipes running over the earth. 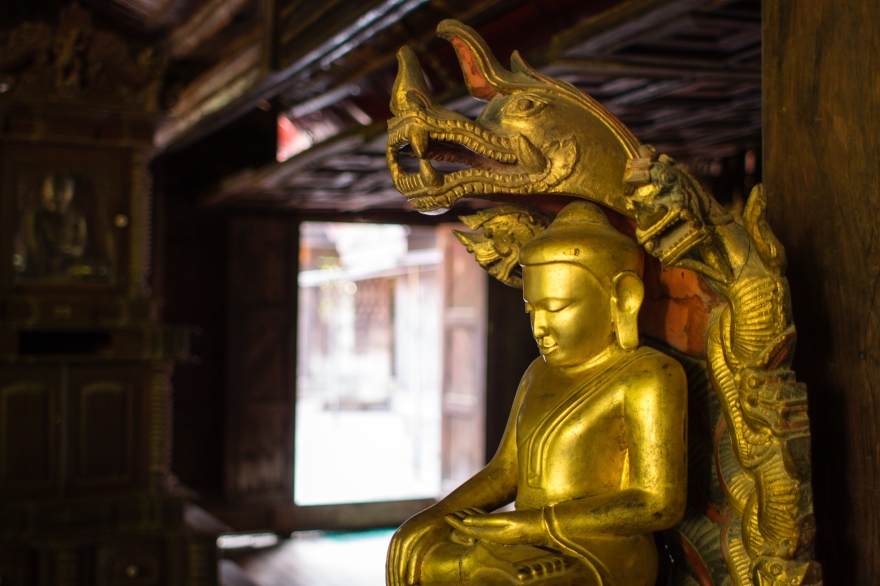 We visited a museum in Salay. And some temples, as you do. I shuffled around, forward and back, as I framed little Buddhas and expansive, temple-dotted fields through my lens. I peered closely and then I stepped away to take in the larger scene. Everything pieces together. We got back in the car and more flashed by: banyan trees, oxen hauling huge piles of hay, roadside stands, tan fields. The road became more crowded and buildings less and less sporadically lined the side as we approached our next destination. 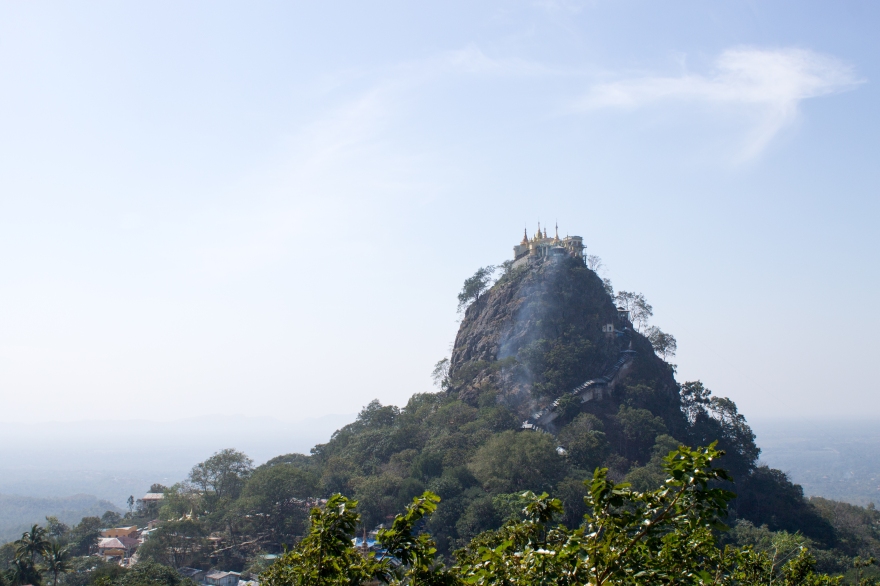 Mount Popa juts out from the surrounding landscape, unmissable, unmistakable. If spirits live anywhere, yes, it would be here. We joined a few other foreigners, but mostly Myanmar people, as we shuffled barefooted up the 777 steps to the top of Taung Kalat. We sidestepped into rooms off the stairs, where people worship the resident nats, placing cash, fruit, flowers, and cigarettes by their sides. Monkeys darted around, lured by cones of nuts that people would hand off to them. At the top, the expansive country spread out below and around us: greenery dotted by villages, Bagan in the distance. Closer at hand, Buddhas and nats watched my cautious movements, avoiding the worst of the nutty mess on the ground with my bare feet, golden mirrors reflecting every which way, gongs sporadically gonging, flashes in the corners of my eyes as people bowed to the ground, the fabric of their clothes rustling. I could look closer and closer and the details wouldn’t end. I could expand the scene as much as possible and it wouldn’t cease to amaze. Neither version could I fully grasp in understanding; I could just look. 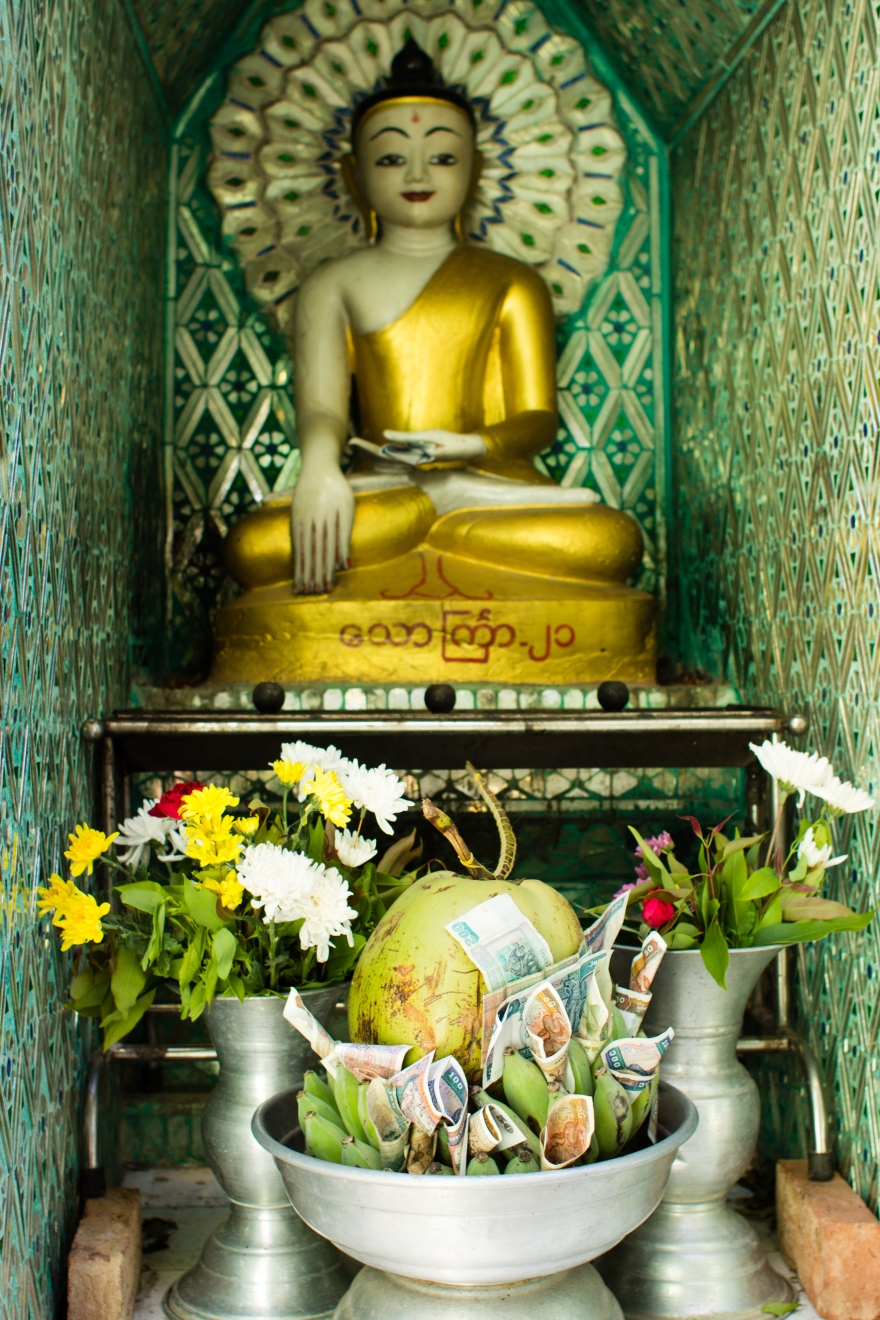 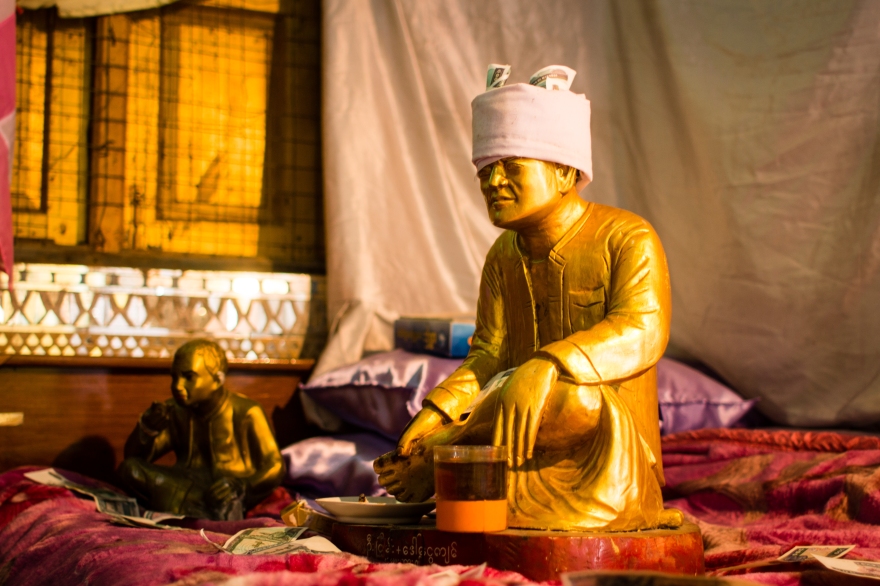 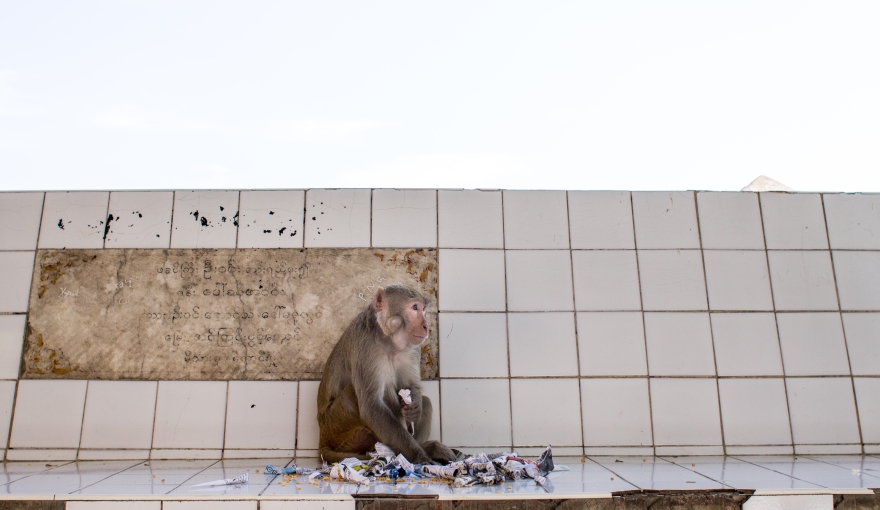 The soles of my feet ached from pounding the 777 step descent. The sun struck my skin and sweat formed in greeting. We three foreigners and our driver sat back in the car as we made the couple hour journey back to Nyaung U, politely honking as we passed other vehicles. Every now and then, we’d hit stretches of highway dotted by people, mostly women, standing or sitting on the side. I realized they were begging, hoping. Thus far, from Mandalay from Nyaung U, I hadn’t seen the really desperate poverty I knew the country contained. We stopped at a gas station that stood in contrast to the potholed road and the impoverished people alongside it: the interior glistened with a large bathroom, the cleanest I had seen. 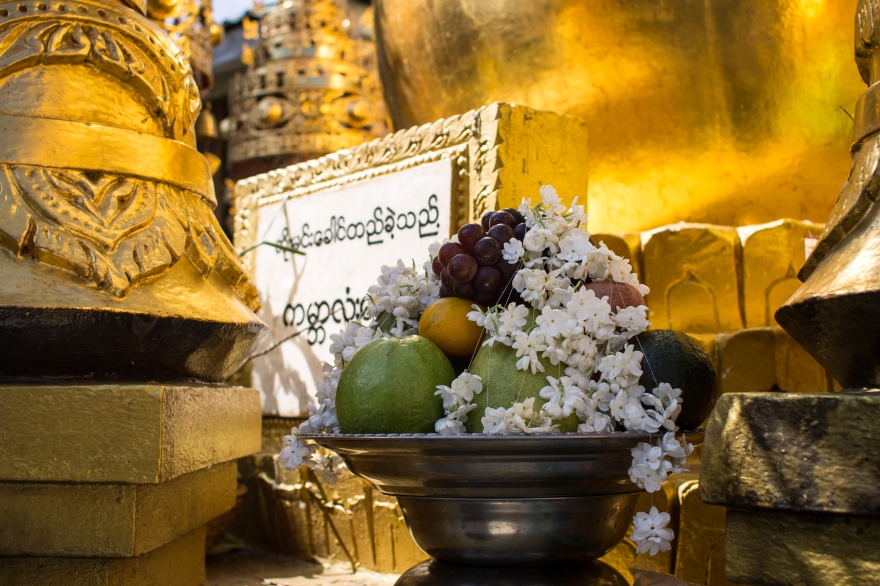 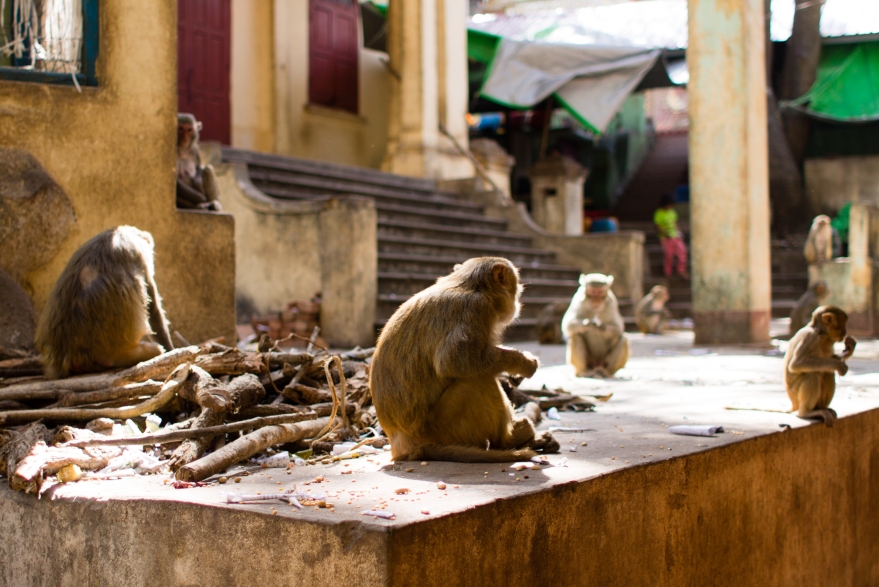 From afar or close up, I noticed discrepancies, contradictions, items of beauty and of mystery and of trauma. For now, I could just observe, take note, try to slightly unpack, learning all the more I yet needed to know to understand. These people, whose military had stripped the country’s people of wealth, of voice, surrounded me, almost all smiles. I’m trying different angles, different depths, in increments building what I can comprehend.