I’m A Stranger, Which Makes Me Free

Two overnight flights in a row: over the Atlantic, over Russia. Eagerness overrode any exhaustion—at first—but then it all began to drag into a tunnel of grey, vibrating time when Siberia Airlines’ idea of a veggie wrap was served in the form of a blob of mayonnaise garnished with cole slaw, tucked away inside of a tortilla. And that was in fact, the most edible vegetarian airplane food from then on.

But no matter, shaking away hunger and, more pressingly, thirst, cloaked in a sheer veneer of tiredness, which I at times had to swat away from in front of my face but mostly ignored, we landed at the small Irkutsk airport and walked into the arms of friends—at this point, my friend’s friends. I blundered with my heavy backpack, which was soon to be shouldered not by me but by the man among us, as they do, and began drowning in the foreign sounds and sights that enveloped us as we emerged into the sunny morning.

But, I suppose, drowning isn’t it. I’m submerged, not always able to function normally, really just drifting along on the current, but there’s no panic, no flailing, no “look at me! Help! Get me out of this water!” I simply watch and attempt to listen as my sluggish, poor sleep-deprived brain scrambles through the detritus of four years past to unearth the Russian that lays buried. I flinch every time I mutter también instead of тоже. I mostly watch the others and try to force myself to understand what I don’t, through sheer force of concentration, which helps sometimes, but still. And sometimes I don’t even try but look around instead.

Following, following. Dropping off my laptop at the Great Baikal Trail office—I won’t be needing that for two weeks. Dropping our bags off at the hostel. And quickly, quickly, off to Listvyanka to see Lake Baikal. I’m finally here, I need to see it, and the plans generously form around what is best for me, the new one in town. Following my friends to the market—finally, edible food! Mushroom pies! Ice cream! (in the cold places, they very much love their ice cream and I stand behind this sentiment.)—following them to the marshrutka, the minibus, that will take us to Listvyanka, an hour away. And we’re speeding down the road, my back to the driver, some sort of oil leaking over the floor, mushroom pie crumbling into my lap but mostly my eager, parched mouth.

Birch trees fly by as we crest hills and descend over and over. I’m in Asia, I tell myself. I’m in Siberia. The mystery is here. I’m somewhere, to me, that is wholly new. And I just float along: no discomfort, no worry, just watching it all fly by. 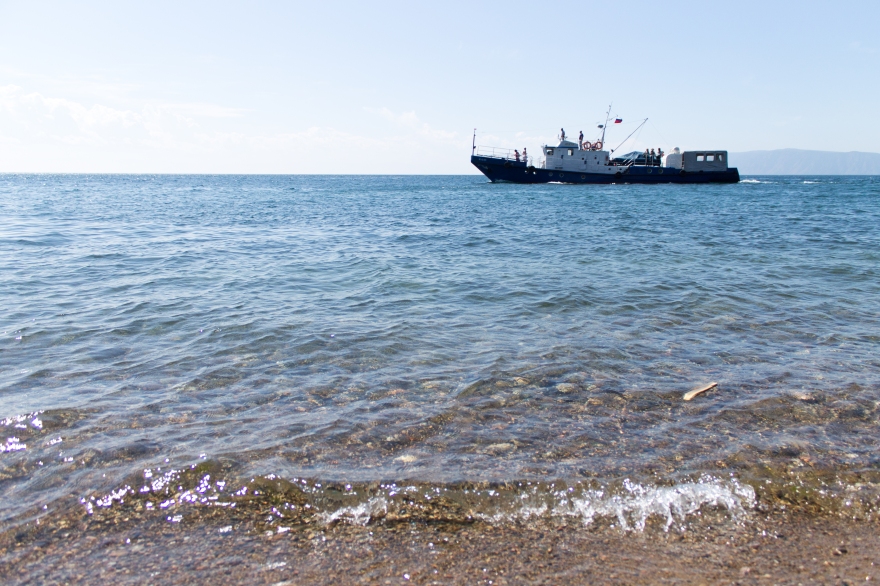 Lake Baikal. Even those who have seen it before can’t help but widely grin. We can barely make out the shadowy mountains across the water. If you squint hard enough, they materialize. If you listen hard enough, you understand. If you spend your energy trying, instead of fighting, the new and real, you’ll serenely coast along and absorb it all into your consciousness, your flesh. We wandered on the stony shores, through the fish market, gathering food—fish for them, berries for us all, raspberries, strawberries, gooseberries, like bitter grapes. We sat on the shore, smiling, eyes narrowed against the sun, my skin rapidly reddening, why yes, I got a tan in Siberia.

Let’s ride in a boat! Dima says. It’ll be fun! He says. I expected something calm, a placid glide over the clear water, but no, this is Russia and everything jarringly collides, it’s idiosyncratic, because suddenly we are bouncing over waves, jerking back and forth on a speedboat as it figure eights, spray everywhere, and we’re screaming and laughing in the borderlands of glee and fright. The sun beats down, the air shimmers, the water shines even more. I’m in Siberia! I’m on Lake Baikal! I laugh and let the boat toss me around, head back, face open, everything pouring in, for Lake Baikal is all-encompassing, it carries its own feeling.

Another idiosyncrasy of mine: at this point, I don’t care if I don’t understand everything. I don’t get bothered when I don’t comprehend a language as it floats around me. I don’t care if I don’t know what I’m doing, just caught up in the glide of my hosts, or rather new friends. I, ever in need of control at home, shaking, clenching, nails scraping my palms, my thighs—I need it, see, it’s my home, my place—let this pressure slip off, like a heavy black cloak onto an entry hall floor and I hold up my arms, shrug my shoulders, and confidently step into a place that is not mine, never mine, and I am free.